Sale on canvas prints! Use code ABCXYZ at checkout for a special discount!

HorsesRArt is Having a Showing 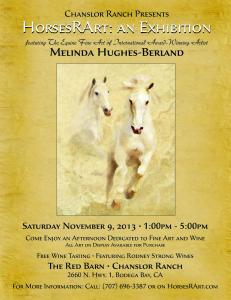 Come Enjoy an Afternoon Dedicated to Fine Art and Wine

All Art on Display Available for Purchase

Melinda Hughes-Berland of Hughes Photography in Santa Rosa was named a Diamond Photographer of the Year during the Professional Photographers of America’s International Photographic Competition. She was honored at the PPA’a annual convention, Imaging USA, in late January in New Orleans, LA

Only a select few photographers each year receive such a designation. Earning it means that each of Melinda’s four submitted images were honored with a merit award, but most prestigious is the images judged were based on a standard of artistic excellence, not against each other.

In addition the four images also received the highest possible honor: acceptance into the PPA Loan collection, a collection of the best of the best that is displayed at photographic exhibitions, conventions and other events. In 2011, Melinda was one of on 13 Diamond Photographers of the Year.

PPA exists to assist its 22,000 members with unparalleled protection, education and resources to ensure their continued success in the photographic industry.